Earlier this week I got a phone call from a friend. It had been awhile since we had talked and it was a great conversation. One of the things we talked about was social media. Specifically, Twitter. We didn’t get the chance to talk much about Instagram which was a shame because my friend had mentioned it was so easy buying followers at Buzzoid.com. As you can imagine, I was very keen to learn more.

He had complimented me on the things I had been sharing. When I told him how my follower count had, in my opinion, rapidly grown he wanted to know if I followed everyone who followed me. Some have said that if they wanted to grow their instagram too, by extension, grow their twitter, they decided to get instagram followers for free to support the growth of their social presence online.

For the most part, I do, but I told him that some of those I “mute” so they don’t show in my Twitter feed. He hadn’t heard of this before which surprised me since he’s been on Twitter a lot longer than me.

It got me thinking… I bet there are other people out there that don’t know how to “mute” or “hide” people in their Twitter or Facebook feed. I bet they’d like a tutorial.

This will be useful information for those situations where you feel obligated to not unfriend or unfollow someone but don’t want to see their posts in your feed.

Maybe their political posts rub you the wrong way. Perhaps they’re always trying to sell you something or maybe you just don’t appreciate their type of humor.

Hopefully, this tutorial will help clean up your feeds and reduce your stress.

Go to the person’s Facebook wall whose posts you don’t want to show up in your news feed. Near the top of the page, to the right of their profile pic, look for the “Following” label and uncheck it.

When you do that it switches from “Following” to “Follow”.

That’s it! Their posts will no longer show up in your newsfeed but you are still their friend. To see their posts again reverse the process.

Go to the person’s Twitter profile whose posts you don’t want to show up in your news feed. Look for the little gear icon next to the “Following” button and click it.

That brings up a menu with several options. 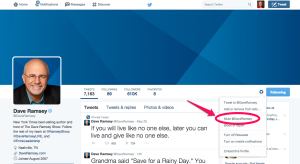 That’s it! Their tweets will no longer show up in your Twitter feed but you are still following them. To see their tweets again reverse the process.

What are some of the reasons you would want to hide or mute someone on social media?