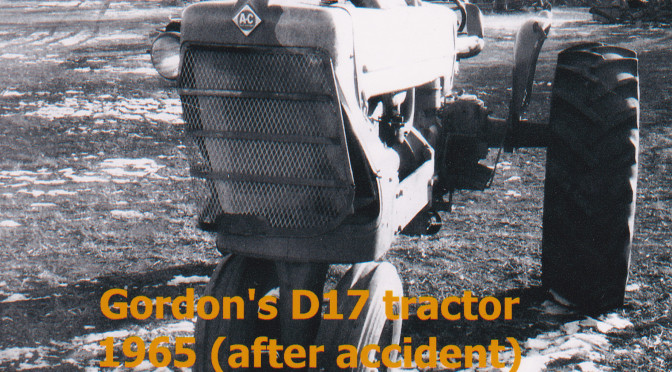 Today I’d like to tell you a little about my friend Gordon.  I call him my friend but really anyone who’s spent more than a minute with him would call him that.

Gordon is one of the patriarchs of our Church.  A man whose kindness towards others and whose faith in God runs deep.  He’s the type of guy who probably goes through 50 pounds of sugar each Christmas making homemade candy for his family and friends.  He’s the guy who must come to Church each Sunday with a roll of quarters in his pocket so he can give one to every child he sees to put in the collection tube for Heifer Project International.

Recently, Gordon gave his testimony to our congregation.  It’s an inspiring story that many had heard before but were glad to get the opportunity to hear again.

He titled his testimony “God’s Not Through With Me Yet” and shared how 48 years ago a tractor accident rocked his world.  This was back in the day before tractors had cabs.  One careless moment reaching for a cigarette had the tractor airborne and upside down in a ditch.

Fortunately, a 5 year old boy heard the accident and was able to get his father to help.  The tractor fared better than Gordon.  He had “a badly shattered left leg, many broken ribs, a dislocated shoulder, and seven of the transverse processes in his back were snapped as though a plumb line had been used.”

Four days into his hospital stay his kidneys quit working.  At the end of the second week the doctor asked Gordon’s wife if she’d like to bring Gordon’s 2 children to see him.  That was a grim question because much like today, in 1965, children weren’t allowed in the intensive care unit.

Before the visit with their father Gordon’s wife took the children into the hospital chapel to discuss what they would see;  to talk about their father’s condition and the probability that he might not live.  It’s at that point the eight year old daughter said, “Mother, you need to have more faith than that.”  Surely, this whole ordeal impacted that young daughter as today she is  a nurse.

The accident happened in early December and Christmas Eve morning when Gordon’s wife arrived at the hospital a nurse stopped her to say, “We don’t know what was going on during the night, but we felt we needed to sit by your husband’s bedside.  He kept reaching and reaching for something.  Then he’d get a real puzzled look on his face and his hand would fall back.”

“Where am I?  What happened?” For the first time in 20 days Gordon was conscience enough to ask questions.  After reminding him where he was his wife asked him, “what happened to you last night?  What were you reaching for?”

He answered by sharing how “there was the most beautiful music I have ever heard, and a light that was so bright and yet so peaceful. Angels kept flying around my bed all night and they kept reaching out their hands to me and kept saying, “Come Gordon, we have a place prepared for you.”

Gordon never could reach those hands.  It was Christmas Eve and he was moved out of ICU and stayed at the hospital for another 3 weeks followed by months of recuperating.

One interesting note, at the back of Gordon’s medical chart the doctor wrote “MIRACLE”.  This was one of the same doctors who earlier in the month had given his wife “nothing to pin her hopes on” and allowed his children to see him in the ICU.

Every day is a gift from God and everyday Gordon lives that gift.  He figures that had he touched one of the angels he wouldn’t have been around to share his story so God, “Must not be though with me yet.”

Gordon was not called to the ministry… but rather to serve in our community.  He does that in many ways but most importantly by sharing his story and his love of the Lord.

Yesterday he reminded us all that, “Every day without exception is a gift from God.”

2 thoughts on “God’s Not Through With Me Yet”