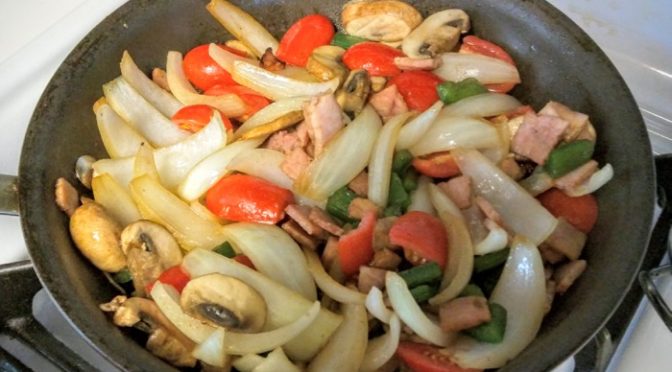 I’ve written before about how certain smells bring back memories for me.  Well, it happened tonight while I was making supper.  It was “Family Omelet Night” and I had everyone else’s made and was putting mine together.

In my “fixins” pan I was heating up some ham, onions, mushrooms, and fresh jalapenos and tomatoes from our garden. 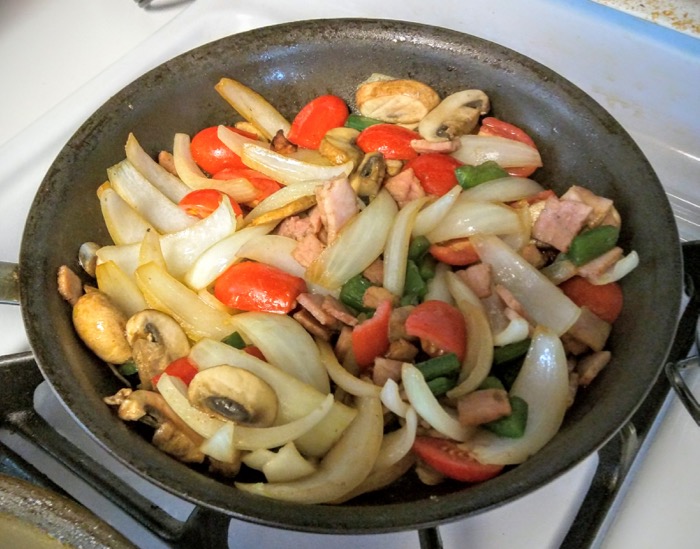 The smell of those particular ingredients cooking together reminded me of what the inside of Happy Joes Pizza smelled like when I was a kid.

I don’t ever remember eating at Happy Joes Pizza with my family. Our usual family pizza joint was Pizza Hut.  That’s where we went when we weren’t eating at Bonanza for the salad bar.

Happy Joes is linked in my memory to birthday parties with friends! I know I went to several.  They had a special window with stairs so kids could watch the pizzas being made.  I thought that was so cool.

The other thing that I remember about Happy Joes is they had a small section of candy with suckers the size of softballs.  I never got one of those rainbow colored suckers… but I do remember getting a Jolly Rancher candy stick a few times. Fire is/was my favorite.

Our omelets tonight were awesome but I’ll admit that after smelling the ham, mushrooms, onions, peppers, and tomatoes cooking I kind of wanted Happy Joes Pizza!

Do you have a Happy Joes Pizza memory? 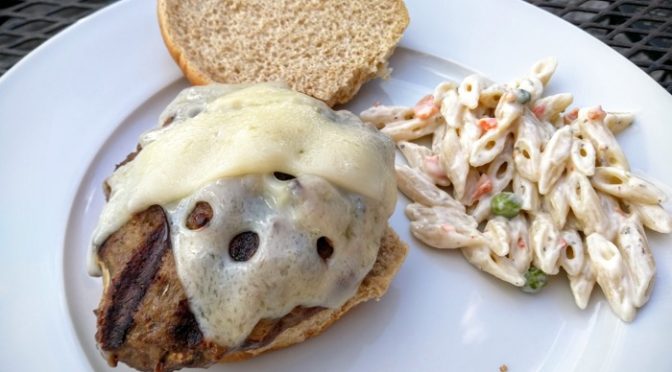 At the beginning of Summer Fareway, one of our local grocery stores, had a great deal on ground turkey.  Just $1.25 a pound.  I thought it was a heck of a deal and all the incentive I needed to give ground turkey a try.

Until this Summer I’ve never used or eaten ground turkey… at least that I knew of.  I picked up 10 pounds of it and my family has been experimenting with it in some of our favorite recipes. 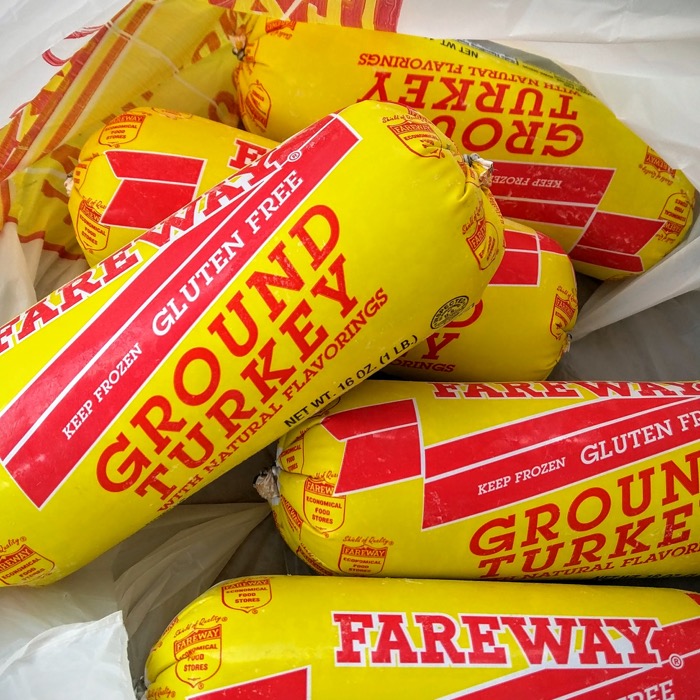 Turns out ground turkey is a great replacement for ground beef in tacos and spaghetti.  I’ll be substituting it into my chili recipe later in the Fall and Winter.

Since I love a good burger I wanted to see what kind of burgers we could make with ground turkey.  Our first attempt was OK but a little too salty.

My oldest daughter and I took that first experience, made some modifications, and came up with what we think is a pretty awesome (and economical) turkey burger recipe.

We’re happy to share our recipe and a video we made below to show you how it’s done!

Beat the eggs in a large mixing bowl.  Stir in the soup mix and worcestershire sauce.  Add the chopped mushrooms and stir to coat.

Now add the ground turkey and work it all together with your hands. (Don’t forget to wash them first!) You want it all mixed together but don’t over do it.

Put the mixture in the refrigerator to chill for 15-20 minutes.

After the meat mixture is chilled divide into 8 portions and make each into a burger patty.

Grill over medium to medium high heat for 20 – 25 minutes flipping once halfway through.  When the internal temp registers 160° top each burger with a slice of swiss cheese and cook for a few more minutes.

The cheese should be melty and the internal temp should be 165°.

Serve on buns and enjoy!

If you’ve never had or made turkey burgers before this would be a great recipe to start with.  The worcestershire sauce and soup mix give it great flavor.  The mushrooms add an earthy flavor and texture that help mimic a hamburger.

Also, by adding the mushrooms into the burger you’re guaranteed some in every bite.  When I’ve had mushroom topped burgers before many, if not most, of the mushrooms end up falling off of the burger.

Since we got such a great deal on the ground turkey I figure each burger (bun, cheese, and all) cost about $1.15.  Not too bad for a delicious and healthy burger!

Do you like turkey burgers? How is your favorite recipe different than ours? 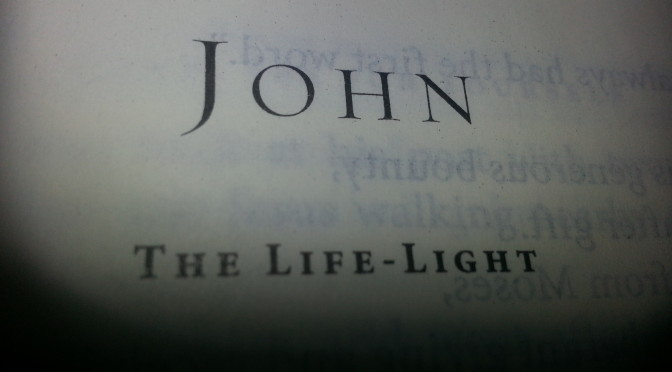 It doesn’t happen every time, though. Only on the years when the fish are biting in Minnesota (where some relatives have Summer homes).

Fortunately, the walleye were biting earlier this year and my uncle and some cousins caught enough to share with our group.

My job in the fish fry is to cut the fish in manageable pieces and look for any bones that might have been missed during the filleting process.   The uncle that helped catch the fish is in charge of coating the fish.

It’s a not so secret breading.  Just ask him and he’ll share his recipe. After they’re coated one of my cousins drops them in his fryer.

When the timer goes off and the fish are dumped on a paper towel lined plate to cool my uncle will announce, “There’s more fish ready!”  It won’t take long before the plate is empty.

This year, like many before, I wondered to myself if we’d have enough fish for our group.  Five Ziploc bags of fish never looks like nearly enough for our large family gathering. 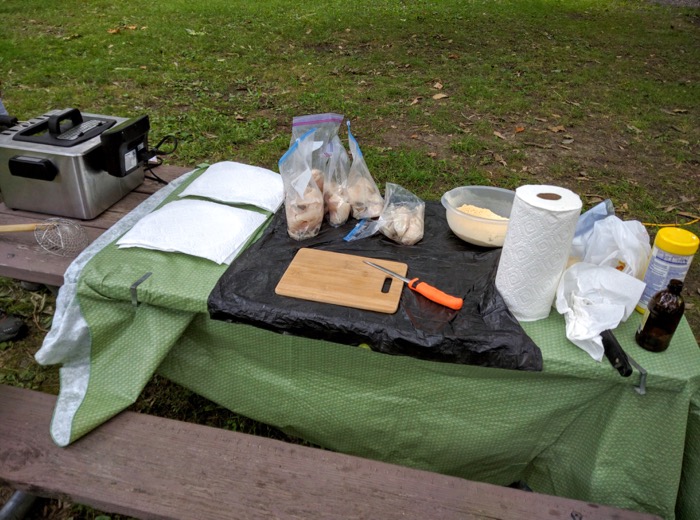 Like always, though, we had more than enough.  Everyone got their fill of delicious, crispy, fried walleye.  It was better than anything you’d get in a restaurant.

It reminded me again of the fishes and loaves story in the Bible. Where, like me, the disciples questioned how to feed a large group. They wondered if they’d have enough.  At our fish fry, just like in the Bible, there was plenty for everyone.

I chose to make a fish taco with some of my portion.  It was awesome! 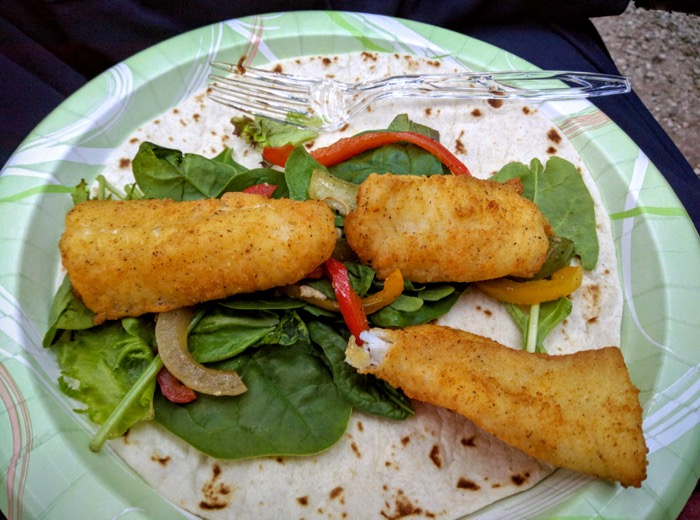 Can’t wait until next year.  Hope the fish are biting then!

Since I had the fishes and loaves story on my mind I thought I’d share it with you.

6 Some time after this, Jesus crossed to the far shore of the Sea of Galilee (that is, the Sea of Tiberias), 2 and a great crowd of people followed him because they saw the signs he had performed by healing the sick. 3 Then Jesus went up on a mountainside and sat down with his disciples. 4 The Jewish Passover Festival was near.

5 When Jesus looked up and saw a great crowd coming toward him, he said to Philip, “Where shall we buy bread for these people to eat?” 6 He asked this only to test him, for he already had in mind what he was going to do.

7 Philip answered him, “It would take more than half a year’s wages[a] to buy enough bread for each one to have a bite!”

8 Another of his disciples, Andrew, Simon Peter’s brother, spoke up, 9 “Here is a boy with five small barley loaves and two small fish, but how far will they go among so many?”

10 Jesus said, “Have the people sit down.” There was plenty of grass in that place, and they sat down (about five thousand men were there). 11 Jesus then took the loaves, gave thanks, and distributed to those who were seated as much as they wanted. He did the same with the fish.

12 When they had all had enough to eat, he said to his disciples, “Gather the pieces that are left over. Let nothing be wasted.” 13 So they gathered them and filled twelve baskets with the pieces of the five barley loaves left over by those who had eaten.

14 After the people saw the sign Jesus performed, they began to say, “Surely this is the Prophet who is to come into the world.” 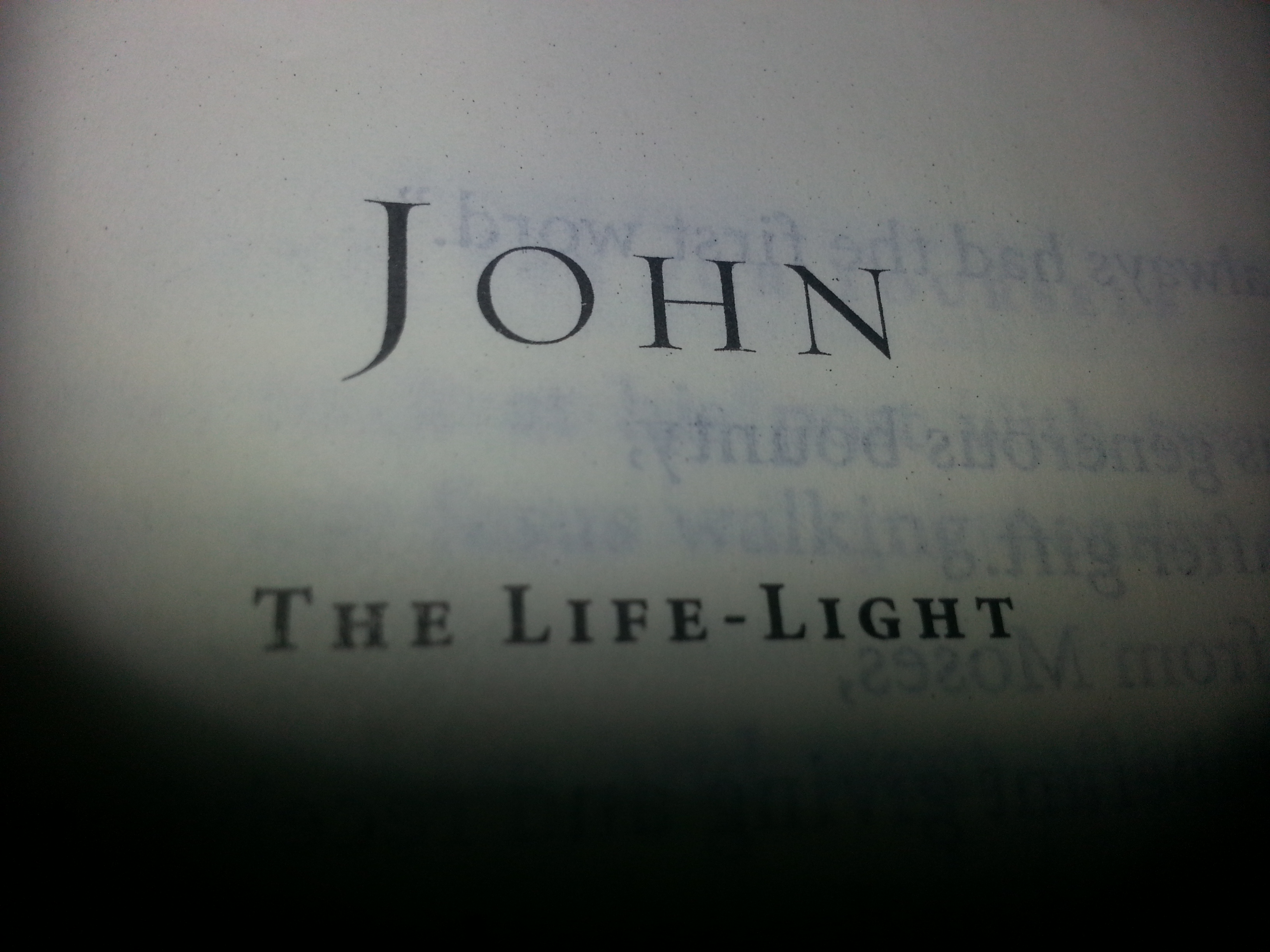